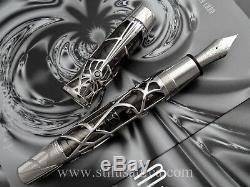 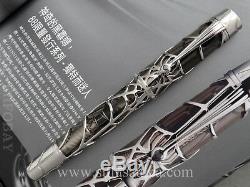 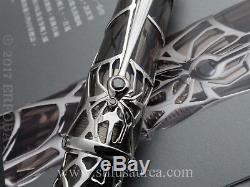 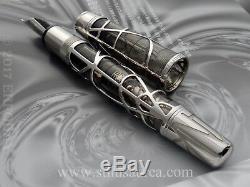 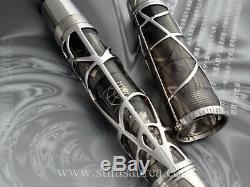 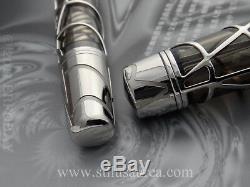 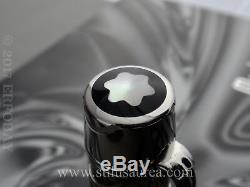 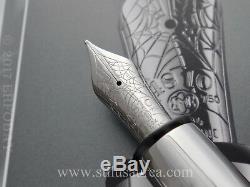 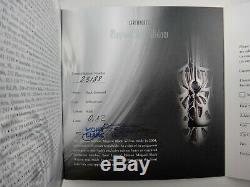 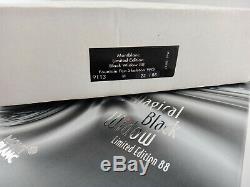 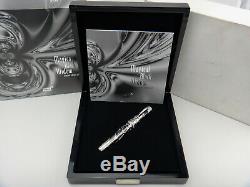 MONTBLANC Magical Black Widow Skeleton Limited Edition 88. 09113 // Launch July 2004. With the Limited Edition Magical Black Widow Montblanc pays masterful tribute to the mythology of the spider as a positive sign for fortune. A Collectors piece inspired by the iconic lucky spider. Creatures from a different world. Like no other creature in the animal kingdom, spiders have a strange and fascinating effect on people. The black widow is regarded as the queen among the arachnids. This venomous beauty is distinguished by the striking red markings on its black shiny body. The black widow earns its name from the females peculiar characteristic of eating the male after mating and thus making itself a widow.

A magical symbol of cultural history. As a result of its ambivalent reputation, different meanings are attached to the spider in mythological history. Thus, in some cultures the image of a spider climbing down a thread is regarded as good fortune coming from heaven and a harbinger of fertility and wealth. Moreover, the shape of the spiders body, which being divided into two sections forms a figure eight, is often interpreted as the symbol of infinity. The spiders web is seen in some traditions as reflecting the intricate interconnectivity of life as a dreamcatcher which protects people from bad dreams.

On the other hand the spider does not enjoy a positive reputation in all mythologies: in some traditions it represents the lethal counterpart of the busybee and is the embodiment of mans sinful urges. The design is inspired by the ancient myth of the spider.

Its limitation to 88 pens worldwide is based on the figure 8 as a symbol of infinity. The artistically sculptured 750 solid white gold overlay - reminiscent of a spiders web gleaming in the sunlight envelops the trasparent (skeletonized) barrel and the cap and continue sas fine engraving on the cone and the top cap.

A reference to the black widow is incorporated in the clip: a filigree spiders body set with two black diamonds symbolizing the fascinating aura of this secretive creature. Clip drop in the shape of a black widow set with diamonds, black, approx. 18K 750 Platinum plated medium 18K gold nib engraved with a specific spider web pattern.

Notice for MB Artisan Collectors. One of the most sought after Montblanc pens, the Black Widow is encased by a web of 750 white gold, featuring a filigree spider studded with black diamonds on the clip. In some countries, the spider is seen as a symbol of luck, and, in honor of the lucky spider, whose figure 8 shaped body symbolizes infinity, Montblanc produced only 88 of these beautiful pens. 5 5/8 (14.4 cm). The concerned LE 88 Black Widow comes in mint / Full Set condition. Black lacquered presentation box with all original packaging and papers (outer box, white carboard box, booklet/Certificate). The certificate shows the stamp of Montblanc Milan Montenapoleone Flagship store. The pen itself is in untouched condition. FYI the Black Widow series consists of: Montblanc Black Widow Diamond Version 8 (Ref: 09025), Montblanc Black Widow.

The attached photographs are to be considered part of the description. We are at your disposal for any further information. We usually reply messages within the same day, but please allow do bear in mind that our time zone differences might cause a slight delay. The item "MONTBLANC MAGICAL BLACK WIDOW 88 SKELETON FOUNTAIN PEN ARTISAN LIMITED EDITION" is in sale since Thursday, March 22, 2018.

This item is in the category "Collectibles\Pens & Writing Instruments\Pens\Fountain Pens\Montblanc". The seller is "erfobay" and is located in Paris.