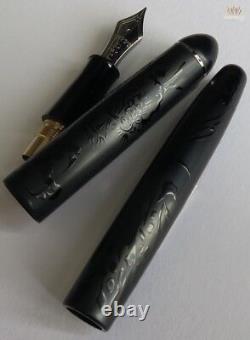 The Chinese character connected means a birth of life. It is also the ninth Chinese character. And from ancient times in China, the number nine is thought of as very important and special, in part because of its closeness to the number 10, which is considered best. The nine is used sometimes in China, for example there is the Kowloon Area in Hong Kong City, which means Beyond the Sky or End of the sky, and very famous word, which means king or power itself. In honor of this anniversary year, which comes just once every sixty years, Platinum Pen is producing a limited number in just 150 pieces of the Jin-shin Black Dragon in the Dark fountain pen.

The image of the dragon rising to the sky is represented on the fountain pen by Maki-e technique. We are experience, honest, reliable, fast and we sell only genuine products. For Fountain Pens: It is new, not used, not inked and not dipped. For Ball Pen, Roller Pen and Pencil: It is new and not used.

For Lighters: It is new, not fired and not used. All items are complete with original box and papers.

We are one of the largest & reputed dealers in the world. This item is in the category "Collectibles\Pens & Writing Instruments\Pens\Fountain Pens\Other Fountain Pens".

The seller is "castle98" and is located in this country: SG. This item can be shipped worldwide.